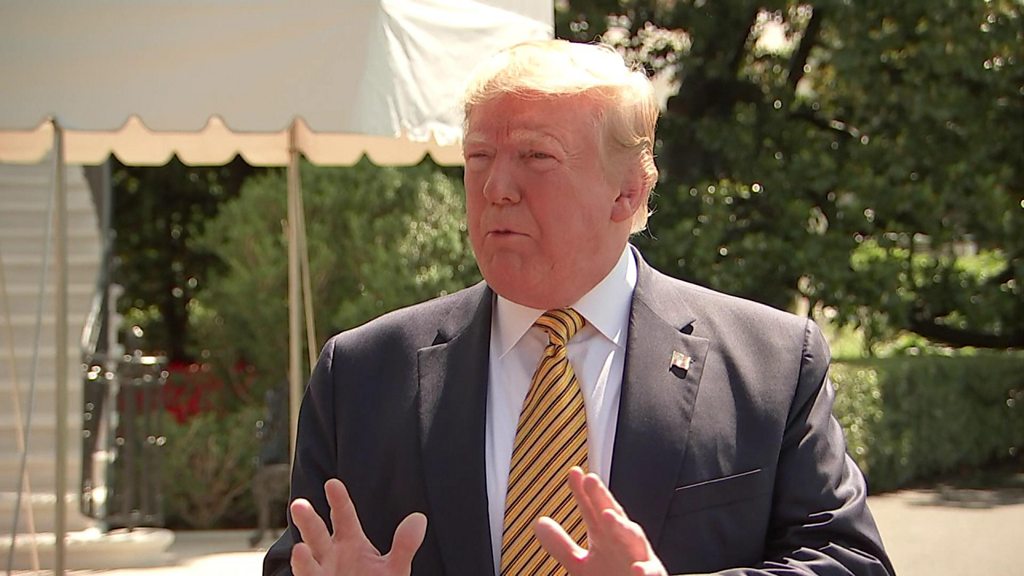 The US will impose “major” additional sanctions on Iran in a bid to prevent the country obtaining nuclear weapons, President Donald Trump says.

He said economic pressure would be maintained unless the leadership in Tehran changed course.

“We’re putting additional sanctions on,” he told reporters. “In [some] cases we are moving rapidly.”

It comes after Iran announced it would exceed internationally agreed limits on its nuclear programme.

The limit on its stockpile of enriched uranium was set under a 2015 nuclear deal with world powers. In return, relevant sanctions were lifted, allowing Iran to resume oil exports – the government’s main source of revenue.

But the US pulled out of the deal last year and reinstated sanctions. This triggered an economic meltdown in Iran, pushing the value of its currency to record lows and driving away foreign investors.

Iran has responded by scaling back its commitments under the nuclear deal.

“If Iran wants to become a prosperous nation… it’s OK with me,” Mr Trump said. “But they’re never going to do it if they think in five or six years they’re going to have nuclear weapons.”

In a later tweet, Mr Trump said the “major additional sanctions” would come into force on Monday.

President Trump may have had second thoughts about carrying out a military strike against Iran, but he is set to toughen economic sanctions – the very policy that has helped bring the two countries to the brink of war.

Iran’s economy is suffering badly and it is threatening to breach some of the terms of the nuclear agreement it reached with the major powers.

Mr Trump is also calling for negotiations with Iran. Earlier this month, Secretary of State Mike Pompeo offered talks with no conditions, save that Iran start behaving like “a normal nation”.

But Tehran dismissed this as “wordplay”. Mr Trump’s new sanctions will do nothing to reduce these tensions.

A diplomatic “off-ramp” in this crisis seems as elusive as ever.

How have US sanctions hit Iran?

The reinstatement of US sanctions last year – particularly those imposed on the energy, shipping and financial sectors – caused foreign investment to dry up and hit oil exports.

The sanctions bar US companies from trading with Iran, but also with foreign firms or countries that are dealing with Iran.

This has led to shortages of imported goods and products that are made with raw materials from abroad, most notably babies’ nappies.

The plunging value of the rial has also affected the cost of locally produced staples such as meat and eggs, which have soared in price.

Iran has responded to the economic pressure by violating some of the nuclear deal’s commitments. It has also accused European countries of failing to live up to their promises of protecting Iran’s economy from US sanctions.

What is the bigger picture?

President Trump’s announcement that additional sanctions will be imposed on Iran comes at a time of escalating tensions between the two countries.

On Thursday, an unmanned US drone was shot down by Iranian forces in the Gulf.

Iran’s Islamic Revolutionary Guard Corps (IRGC) said the drone’s downing was a “clear message” to the US that Iran’s borders were “our red line”.

But US military officials maintain the drone was in international airspace over the Strait of Hormuz at the time.

Amir Ali Hajizadeh, a high-ranking officer in the IRGC, said another military aircraft, carrying 35 passengers, had been flying close to the drone. “We could have shot down that one too, but we did not,” he said.

The shooting down of the drone followed accusations by the US that Iran had attacked two oil tankers with mines just outside the Strait of Hormuz.

Mr Trump has said he does not want war with Iran, but warned it it would face “obliteration” if conflict broke out.

June 23, 2019 Arpit Comments Off on Bear falls asleep in wardrobe after entering home

Hong Kong protests: How tensions have spread to US

June 23, 2019 Arpit Comments Off on Hong Kong protests: How tensions have spread to US