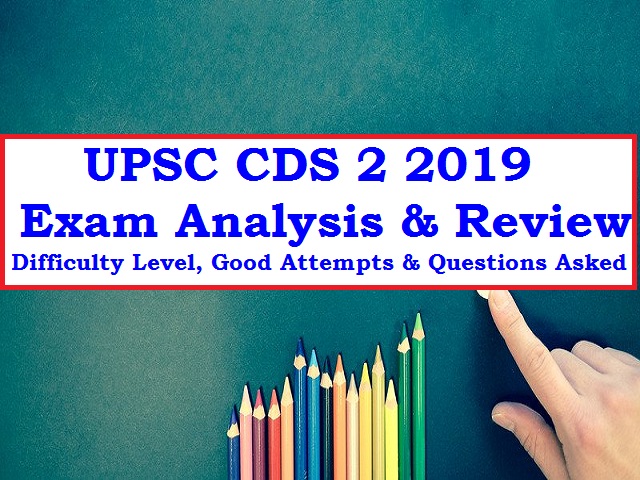 Union Public Service Commission (UPSC) conducted the  CDS (II) 2019 Exam across various cities on 8th September 2019 to fill in a total of 417 vacancies for courses carried out by Indian Military Academy, Indian Naval Academy, Air Force Academy and Officers Training Academy. The Combined Defence Services (CDS) exam was conducted in the offline mode. The Multiple Choice Questions were asked from General Knowledge, Elementary Mathematics and English Language. Candidates who want recruitment in courses of IMA, INA and AFA, attempted questions from all three sections, while candidates seeking recruitment in courses of OTA attempted questions from only two sections English and General Knowledge. Here we have shared the detailed Exam Analysis of UPSC CDS (2) 2019 Exam conducted offline. Have a look and be familiar with the difficulty level of questions.

As per the feedback shared by the candidates who appeared for the exam, the overall difficulty level of the UPSC CDS 2 Exam was Moderate to Difficult level. The General Knowledge section was Easy-Moderate to attempt, while English and Mathematics sections were of Moderate to Difficult level. The English Exam was held from 9:00 AM to 11:00 AM, General Knowledge exam was held from 12:00 PM to 2 PM and Mathematics paper was conducted from 3:00 PM to 5:00 PM. Have a look at the detailed exam analysis:

General Knowledge: 120 MCQs of total 100 marks were asked from the section. Overall, the difficulty level of the section was easy to moderate and students could make around 70-78 good attempts. Questions were asked from Current Affairs, Science, History, Geography, Economy, and Polity. Have a look at questions asked:

Elementary Mathematics: A total of 100 questions were asked from this section. Each question carries 1 mark. The difficulty level of the section was Moderate to Difficult. Candidates were able to make around
60 to 69 good attempts. Have a look at questions asked:

Candidates who would qualify the written exam will be called for the SSB interview. SSB interview will be conducted after the declaration of the CDS Exam result.

March 10, 2020 Arpit Comments Off on UPSC to recruit 100 fewer civil servants than last year despite shortage