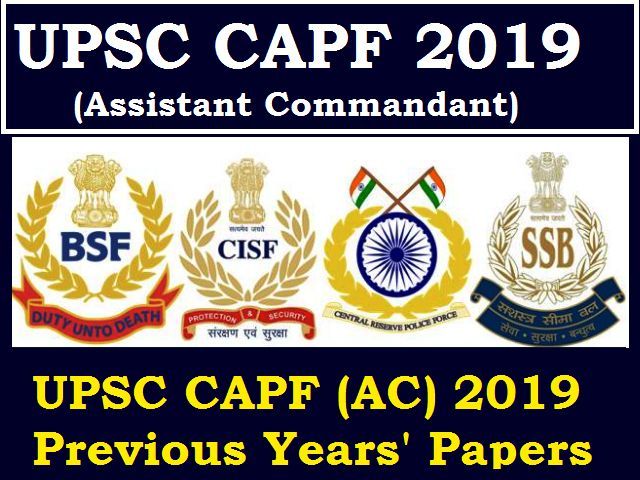 UPSC Central Armed Police Forces (AC) 2019 Exam: The UPSC CAPF Assistant Commandant 2019 Prelims Admit Card has already been released on the official website upsc.gov.in. The Union Public Service Commission (UPSC) will conduct the Central Armed Police Forces (AC) Exam on 18 August 2019. The UPSC CAPF (ACs) recruitment is conducted in 3 Phases – Written Examination (18 August), Physical Efficiency and Medical Standards Tests, and Interview/personality Test. The final selection of the candidate is purely based on merit. A total of 323 vacancies will be filled through this CAPF (AC) 2019 recruitment drive.

Candidates who would qualify the CAPF Assistant Commandants (Group A) examination will be appointed in the Border Security Force (BSF), Sashastra Seema Bal (SSB), Central Reserve Police Force (CRPF), ITBP (Indo-Tibetan Border Police) and Central Industrial Security Force (CISF). With just few days left for the UPSC CAPF (AC) 2019 exam, it is advisable that the candidates should devote this time for practice and revision. Undertake the given previous year papers of UPSC CAPF (Assistant Commandants) and brush up your preparation level. But before that, have a look at the UPSC CAPF (AC) Exam Pattern 2019:

General Ability and Intelligence: This section forms ‘Paper 1’ of the UPSC CAPF (AC) examination. It contains objective type Multiple Choices Questions which are asked in both English and Hindi Language. It covers subjects like General Science, current events, Indian Polity, Indian Economy, Indian History, Geography and General Mental Ability. Have a look at previous years’ question papers of this section:

General Studies, Essay and Comprehension: This section forms ‘Paper 2’ of the UPSC CAPF (AC) Examination and contains two parts – Part A and Part B. The Part A asks descriptive questions in Bilingual language (Hindi or English) of total 80 marks and Part B tests candidates on their command over English Language. The Part B contains Reading Comprehensions and other language based questions of total 120 marks. Have a look at previous years’ question papers from this section:

Practice these papers and prepare well for the UPSC CAPF (AC) 2019 examination.

b. Farm waiver is populistic and myopic: strategy change needed

c. From economic growth to well-being: a paradigm shift

Q2. Write arguments for and against each of the following statements: (20×2=40)

(b) Violence on University campuses during Student elections

Q4. Attempt a précis of the given passage in one-third of its length. Do not suggest a title. Write, as far as possible, in your own words. The précis must be written only in the précis-format given below: (15)

Language as culture has three important aspects. Culture is a product of the history which it in turn reflects. Culture in other words is a product and a reflection of human beings communicating with one another in the very struggle to create wealth and to control it. But culture does not merely reflect that history, or rather it does so by actually forming images or pictures of the world of nature and nurture. Thus the second aspect of language as culture is as an image-forming agent in the mind of a child. Our whole conception of ourselves as a people, individually and collectively, is based on those pictures and images which may or may not correctly correspond to the actual reality of the struggles with nature and nurture which produced them in the first place. But our capacity to confront the world creatively is dependent on how those images correspond or not to that reality, how they distort or clarify the reality of our struggles. Language as culture is thus mediating between me and my own self: between my own self and other selves: between me and nature. Language is mediating in my very being. And this brings us to the third aspect of language as culture. Culture transmits or imparts those images of the world and reality through the spoken and the written language, that is through a specific language. In other words, the capacity to speak, the capacity to order sounds in a manner that makes for mutual comprehension between human beings is universal. This is the universality of language, a quality specific to human beings. It corresponds to the universality of the struggle against nature and that between human beings. But the particularity of the sounds, the words, the word order into phrases and sentences, and the specific manner, or laws, of their ordering is what distinguishes one language from another. Thus a specific culture is not transmitted through language in its universality but in its particularity as the language of a specific community with a specific history. Written literature and orature are the main means by which a particular language transmits the images of the world contained in the culture it carries.

Language carries culture, and culture carries, particularly through orature and literature, the entire body of values by which we come to perceive ourselves and our place in the world. (395 Words)

Q5. Read the following passage and answer the questions that follow-: (4×5=20)

The most essential and useful part to be played by our universities in free India is to educate public opinion, which is the foundation of Democracy. Everyone has a right to educate public opinion, and so every school of thought, in our own Republican Constitution, has been given ample freedom to win public opinion, to its credit. It is here that true character is required and is tested. Our country, today, needs, such people who possess a strong character, who never stoop low to use questionable means under any circumstances. Those who cherish the idea of becoming good administrators must essentially possess a strong character. It should be the first and foremost function of our national universities to impress upon the minds of the future administrators of our country that in a true democracy there are no administrators but only servants of the people.

Another very essential and useful function of our universities should be to build the character of our future citizens. The greatest drawback in our educational institutions has been that sufficient attention was not paid to the moulding of character of the students.

True interest of a country and its people cannot be served simply by framing a Constitution. Constitution is just a set of rules and it can only be effective when persons responsible for its operation prove to be true reformers and real servants of the people and the nation.

Universities have to play a vital role. They should not teach politics to the students simply with the view to make them acquainted with the political structure of the country as well as of the world: but that it should be their function to impress upon them that they are to protect, guide, change, and form the Constitution of their country and then of the world as true citizens and administrators of this democratic age, in body as well as spirit.

(i) What are the essential functions of universities?

(ii) What is the major drawback in our educational institutions?

(iii) Write the benefits of education imparted at universities.

(iv) How best can the educated youth serve the people and the nation as administrators?

(v) What is the contribution of the educated youth as enlightened citizens in a democracy?

(i) The teacher said to me, “Are you not ashamed of telling a lie?” (Change into indirect speech)

(ii) You must complete the work by the end of this week. (Change the voice)

(iv) The minister was annoyed that he had not carried out his orders. (Change into a simple sentence)

(v) Shakuntalam is understood to be the best drama in Sanskrit. (Change to comparative degree without changing the meaning)

(vi) As soon as he came, he made objections. (Rewrite using “No sooner …”)

(vii) The writer is evidently enamoured _____________ the subject. (Fill in the blank with the correct preposition)

(viii) The paper was very easy. He could score high marks. (Combine the sentences using “enough”)

(b) Use the following words and phrases in sentences of your own so as to bring out their meaning clearly: (2×5=10)

(c) Correct the following sentences without making any unnecessary changes: (1×5=5)

(ii) She wasn’t her usual ebullient at the party.

(iii) They did not provide us any chairs to sit.

(iv) Under no circumstances passengers are permitted to open the doors themselves.

(v) I am seeing her enter the room.

UPSC Civil Services (Prelims) 2020 registration process to start from this date: Here’s how you can apply

January 21, 2020 Arpit Comments Off on UPSC Civil Services (Prelims) 2020 registration process to start from this date: Here’s how you can apply