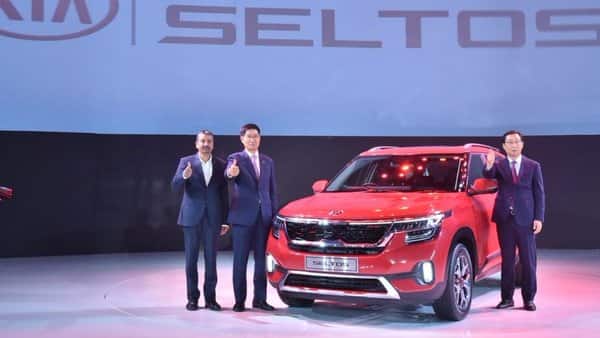 South Korean automaker Kia globally unveiled a new mid-sized SUV, Kia Seltos, at an event in New Delhi, India. The Seltos is Kia’s first offering for India and it is expected to be pitted against the recently launched Hyundai Venue.

The company has not revealed the price of the Seltos, however, it is expected to be in the range of ₹12-18 lakh, according to Autocar India.

The Kia Seltos is based on the SP 2i concept and will come with BSVI-compliant 1.5-litre petrol and diesel-engines as well as a 1.4-litre turbo petrol. The ‘Smartstream’ branded engines will be paired with a choice between automatic and manual transmissions. The automatic options include a CVT for the petrol, 6-speed torque converter for the diesel and a 7-speed DCT for the 1.4-litre turbo petrol. For stick purists, there’s a 6-speed manual transmission as well.

It also gets three drive modes (Normal, Eco and Sport) and terrain modes (Wet, Mud and Sand), that can be chosen by using a rotary knob positioned on the centre console.

From the outside, the Seltos sports an aggressive look, thanks to the Tiger Nose grille. The sharp-looking LED projector headlights and DRLs add to the bold look of the SUV. At the rear-end, Kia has included the “heartbeat effect” LED tail-lights that are linked by a bar of chrome. It will be available in eight colour options, along with five dual-tone schemes.

In terms of interiors and creature comforts, Kia said the top variant will get an eight-speaker Bose system, 10.25-inch infotainment system, 7-inch MID, an HUD and a 360-degree camera. It also gets audio-based mood lighting, traction mode for the auto variant and an air purifier. Kia is expected to include its UVO Connect connectivity suite to take on the smart features provided by Hyundai’s BlueLink system and MG Motors’ iSmart system. UVO Connect system will offer AI-based voice command, stolen vehicle tracking and immobilisation, safety alerts, remote engine start and stop and auto collision notification.

During the unveiling, Kia said it intends to cover every part of the country and promised to expand to Tier-IV markets. It will sell its vehicles via 265 touchpoints across 160 cities.

The Seltos will be manufactured in Kia Motor’s manufacturing capacity in Anantapur in Andhra Pradesh.