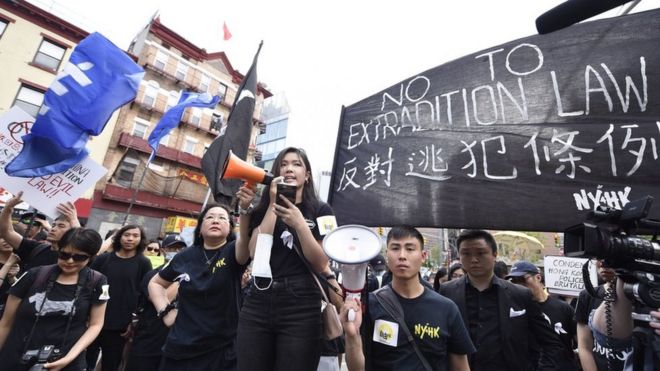 The protests in Hong Kong have heightened tensions between the territory and China, and generated headlines the world over. They have also deepened unease many thousands of miles away – on US campuses.

“I am from a city owned by a country that I don’t belong to.”

So began a column written by a 19-year-old Hong Kong student at a university in Boston. The piece, entitled “I am from Hong Kong, not China”, in a student paper at Emerson College placed its author Frances Hui at the centre of a storm.

Soon after publication in April, well before the protests in Hong Kong erupted, Hui’s social media accounts were on fire. She received overwhelming support, including from Joshua Wong , Hong Kong’s most prominent student activist who liked Hui’s post.

But the support was joined by a wave of criticism from mainland Chinese students at Emerson.

One called Hui “ignorant and arrogant”. Some commented that she and her parents should be ashamed. Another said Hui grew up enjoying electricity and fresh water supplied by the mainland, “but now you claim you are Hongkonger, not Chinese?”

The most striking comment reads: “Anyone who offends our China will be executed, no matter how far they are.”

The sentence is originally from an ancient Chinese history book dated back more than 2,000 years. After being featured prominently in a popular Chinese nationalist action film in 2017, it’s now frequently cited by Chinese netizens where they see China is under attack.

“I had a panic attack when I saw that comment,” Hui told the BBC.

She soon noticed some mainland Chinese students stared at her on campus, and some tagged her social media accounts, commenting that she looked “small and weak” in person.

“I felt I was being monitored,” says Hui. She says many mainland Chinese take it personally when China is criticised, unlike Hong Kong people who often criticise their own government.

Since the 1997 handover, Hong Kong people’s growing distrust in the city’s government and Beijing has been reflected in multiple large-scale protests, most recently in June when a massive march against a controversial extradition bill took place.

China promised Hong Kong a high degree of autonomy within the “one country, two systems” framework, but many now worry the city’s political freedom is tumbling due to Beijing’s tightened grip.

The political tensions have permeated interactions between mainlanders and Hong Kong people, even across the Pacific at American campuses.

Three days after Hui’s article was published, three mainland Chinese students at Emerson penned a letter of response in the student newspaper, the Berkley Beacon.

It is globally and legally agreed that Hong Kong is a part of China, they wrote. The three co-authors turned down the BBC’s interview request.

Xinyan Fu, one of the three Chinese students, wrote in a public Facebook post that they respect Hui’s political views and freedom of speech, but think her article is factually flawed.

Fu called for her fellow classmates to refrain from personal attacks, but that did not seem to work. Under Fu’s post, one commenter wrote: “Shame on you.”

Hui says she welcomes rational and respectful debate through the student paper. She insists her article did not argue Hong Kong is not part of China. Instead, it is about her “Hongkonger” identity. It’s personal and should not be amended by others.

According to a poll conducted by the Public Opinion Programme of The University of Hong Kong in December 2018, 15.1% of Hong Kong people identified as Chinese, in contrast to 40% as Hongkonger. 43.2% of them said they have mixed identity, Hongkonger in China, or Chinese in Hong Kong.

In the 18 to 29 age group, merely 4.1% Hong Kong people identified themselves as Chinese, while 59.2% of them said they are Hongkonger, Hui included.

A mainland classmate agrees with her view, yet this person did not voice support publicly, fearing backlash from other mainland students, Hui says. The Chinese student who threatened to “execute” Hui was reported to the school, but Hui is unaware of any disciplinary actions taken by the college.

In a statement provided to the BBC, Emerson College said it is deeply committed to fostering a respectful exchange of diverse viewpoints and perspectives.

International students account for 16% among the college’s student body, with most of them coming from mainland China and Taiwan.

In June, when an estimated one million Hong Kong people took to the streets, most American colleges were on summer break. The quarrel between Hui and her mainland Chinese classmates was put on hold.

Hui moved her battlefield off campus. She co-organised and attended demonstrations in the US in support of the Hong Kong protesters.

In a demonstration in New York, she wore a black T-shirt with “I am a Hongkonger” written in English and Chinese. “Protect Hong Kong!” She led the crowd to chant.

For some Hong Kong students in the US, the anti-extradition protests became an opportunity for open discussions with mainlanders.

Kenneth Tsui, a Hong Kong student at Maryland University, lives with a roommate from mainland China who after seeing the protests was asking Tsui questions about it. He and his Chinese classmates are used to debates in American classrooms, Tsui says, therefore even if they fail to convince each other, they usually agree to disagree.

During the protests, Kaze Wong, a Hong Kong student at Johns Hopkins University, announced his support through emails and social media. He got a plethora of responses from mainlanders, most of whom wanted to learn about the protesters’ perspectives, says Wong.

“To me, Hong Kong represents hope. It shows me an alternative of ethnic Chinese society. Perhaps one day the mainland can be free like Hong Kong,” says Wang, who retweeted protest photos on Sina Weibo, an equivalent of Twitter in China. The posts were soon deleted.

Wang is supportive of the anti-extradition movement, but he says many Chinese students are indifferent because they were taught to go “numb” to politics and just accept what it is.

Both Wong and Kenneth Tsui have friendly interactions with their mainland friends. They frequently share meals, plan grocery trips and work in the labs together. Yet both Wong and Tsui identify themselves as “Hongkonger”.

“I always introduce myself as a Hongkonger,” Wong says, “If someone says I am from China, I’ll go the extra mile to explain ‘one country, two systems’ to them.”

Hui’s column speaks the mind of many young Hong Kong people born in the 1990s or after, Wong says.

At the year of handover, they were very young or not yet born. After witnessing first-hand and participating in waves of social movements against Beijing, their Hongkonger identity has grown stronger and stronger, says Wong.

In June, Wong and Tsui attended an anti-extradition demonstration in Washington DC, one of many gatherings taking place overseas in solidarity with the Hong Kong protesters. Afterwards, participants posed for photos in front of the White House. Wong noticed some, probably from mainland China, quietly walked out of the frame.

Even thousands of miles away in the US, protesting against Beijing can be much too risky for the Chinese.

Why Is The Digital World More Toxic Than The Physical One?

July 21, 2019 Arpit Comments Off on Why Is The Digital World More Toxic Than The Physical One?